This family friendly musical is the story of a college student (Samantha) home for the holidays, falls asleep the night before Christmas and wakes up in an imaginary place she frequently visited as a child. Once there she must fill in for a beloved clown named Captain Whammy who is departingClownsville. In temping for him, she rediscovers the importance of family & community.

Based on the Canterbury Tales, an english teacher takes her students on an imaginary pilgrimage to Canterbury, where they each must tell a story along the way. The show deals with teen issues using humor and music to move the stories along.

Dreaming of one day living in peace, they go about their day in faith that they will make it to the Temple of Karni Mata. Refusing to submit to the order of things, Nia attempts to go against society’s grain to bring to light the hypocrisy of humans.
She fights hard in hopes of moving out of the shadows and into the light of a new world, free of humans. With a talented cast and catchy music, this family friendly modern opera is definitely a must see! 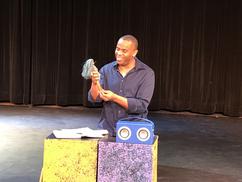 This is the story of an office drone named Thomas. Thomas falls asleep at his desk and wakes up in an imaginary Oz-like realm he invented as a child called, Clownsville . Once there, he must help an animated cast of clowns find a lost Clownsvillian named Tom Tom. Along the journey to find Tom Tom he rediscovers himself.  Clownsville is a musical comedy for all ages about reconnecting with your inner child and following your dreams. 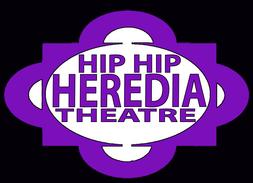 From the Davenport Theatre, The Andrew Freedman Home, The

Schomburg center to the Playroom theater, Then Sean Met Khalid has

a successful run. Our last performance was capped off with hip hop

as the late Dr. Khalid A. Muhammad.

This powerful show is a thought provoking and at times quite

hilarious musical that tackles racism in a refreshingly different manner.

It is a coming of age story follows the life of a Black boy, Sean White, 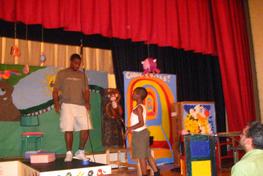 All of our shows are family friendly, for kids and adults alike. Here is some info, pics and vids of each show! 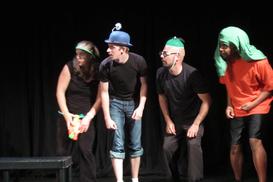 First premiering the the 2019 Greensboro Fringe Festival, “Challenge Accepted,” is a one-hour, family-friendly motivational musical stars its writer and director Carlos Heredia. The one-man show features a musician and actor who recounts his past successes and failures — including his transition to fatherhood and battle with depression and mental health — to evaluate where he is today. This toe-tapping family friendly musical is a motivational masterpiece that will talk to your soul, and leave you with a feeling that yes, it is possible.  The show been performed as part of the Hollywood Fringe Festival, Oglethorpe University in Atlanta and the Nuyorican Poets Cafe in NYC..